My poetry was first published when I was 15 years old –  in an anthology, Next Wave Poets 1, edited by Desmond Hertzberg. More poems appeared the following year in Next Wave Poets 2.  In my early twenties, I wrote ‘Special Delivery’, a poem about the death of my father, which Norman Hidden accepted for his magazine, New Poetry. Norman continued to encourage me for almost thirty years, until his death in 2006. I will always be grateful for his support and for that of the late Peter Porter, who I first met as a student at the University of Kent, and who advised me to apply for an E.C.Gregory Award. I did this in 1980 and was awarded one the following year, along with Mark Abley, Philip Gross, Kathleen Jamie, Alan Jenkins, Simon Rae and others. In 1981, I was also fortunate to be a first-prize winner in the Cheltenham Festival Poetry Competition. I continued to publish in magazines and anthologies and, in 1988, was thrilled when Neil Astley accepted a manuscript of The Peepshow Girl for Bloodaxe Books. Raiding the Borders followed in 1996, New Wings, in 2007, and my fourth collection, Hyem, was published on 26 October 2017. 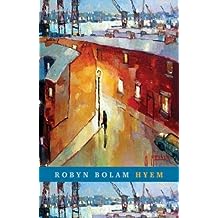 Hyem is about where and how we feel at home – about putting down roots and seeing how far they reach. There are first homes here, creative homes, final homes; those we choose and those we don’t. It’s also about growing up on Tyneside, loving a place through changes and celebrating those who preserve its history and spirit. Home may be a house, a city, country or a planet so Hyem includes eco-poems about some of our elusive neighbours with settings ranging from the New Forest to New Zealand.

‘Hyem (Geordie for ‘home’) is an irresistible collection of carefully constructed observations and recollections which are at once both challenging and soothing. Bolam’s fourth collection from Bloodaxe explores her roots, pulls them out from the ground, examines and replants them once more, bearing new fruits and deeper understanding of place and home. Hyem is an unhurried adventure of rushing rivers, recollections of lost loved ones, changing cities and landscapes, and a gentle self-renewal through the re-examination of memory.’

‘Hyem is an outstanding collection that gives a sense of replenishment and rejuvenation, and at the same time encourages the reader to reflect on one’s own construction of where we call home.’

‘Poems by Robyn Bolam, including Moving On, feature in The Land of Three Rivers, Neil Astley’s magnificent new anthology of verse from and about the North East of England. I should declare an interest, having a short poem of my own included, but add that Moving On, like all the works chosen here, tapped me on the shoulder first: I picked it after I’d finished Hyem and before I’d opened the anthology. Both Hyem and The Land of Three Rivers are pure belta.’

‘Robyn Bolam’s Hyem is a carefully constructed collection of poems that are scrupulously crafted and rooted in authentic experience. The images are well observed and to the point, yet frequently resonate  beyond the circumstances that have inspired them. It’s a collection that allows you to feel and makes you think. It is one also to which you can return with renewed pleasure.’

The poems in “New Wings” focus on many different kinds of beginnings. Drawn both from new poems as well as from two earlier collections, these are poems of living through and coming to terms with changes – sometimes momentous or traumatic – and moving on into the future. In them, the reader travels from Scotland to Stockholm, the Californian desert, New York, rural Pennsylvania, Venice, Constanta, the Blue Mountains, Sydney and Tyneside.

“Compelling and accomplished…a poet of unusual talent” Bernard O’Donoghue, The Times Literary Supplement
“Neither old-fashioned nor new-fangled, but abiding and spiritual.” Peter Porter, Observer
“She displays a range of emotion and characterisation with both versatility and understanding…These are poems I will gladly return to again and again without fear of disappointment.” Richard Jones, Poetry Wales
“The new poems pulse with determined affirmation and renewal…humour and lush detail merge with…poems of unusual intelligence and historical sensitivity”,
Todd Swift, Poetry Review
“There is calm acceptance of mystery; there is precise observation…and carefully sustained metaphor…and in all of this, there is the poet’s trust in her own perceptions, which are at once worldly and otherworldly”,
Lavinia Greenlaw & Alan Jenkins, PBS Bulletin

These poems raid borders of time and place through several centuries up to the present. Like geographical divisions, those between history and myth, despair and hope, possession and loss, are never fixed. From the borders of Northumbria there are forays into Scotland, Wales, southern England, Ireland, and beyond, which show people living with boundaries which they either dare to challenge or are unable to cross.

This first collection is full of different voices – from those of a photographer’s model, a mourning father, a widow fiercely protecting her children, a second wife, and Mrs Mackie with her north-east dialect –  to the words of a Jacobean fragment, a laburnum tree, Eurydice, Guinevere and Isabelle of France. There is also,’…vivid natural description…and freer, more mysterious poems which convey an otherworldly chill…’ Ruth Fainlight

This comprehensive anthology covers over 100 poets from a wide range of social backgrounds across the English-speaking world. Familiar names – Anne Bradstreet, Aphra Behn, Elizabeth Barrett Browning, Emily Dickinson and Christina Rossetti – appear alongside other fascinating writers from America, Australia, Canada, India and New Zealand as well as the UK.

‘Everyone interested in literature or in the place of women in history should own this book. Eliza’s Babes will take you on an extraordinary journey through the lives and writing of women who were famous in their time, mixing with the literary glitterati, as well as those who were ‘minor poets’ struggling to keep food on the table through their writing. . . This is one of the most wonderful, mind-changing, horizon-lifting books I have ever read.  I have given it as presents to many of my friends, and I urge you to buy it.’
Maggie Butt, Poet, novelist, and former Chair of the National Association of Writers in Education

A ‘good resource book which helps to widen the historical poetic canvas’.

Robyn’s poems can also be found in:

Poetry & All That Jazz, South Downs Poetry Festival/Festival of Chichester, 2021

The Selbourne Association Magazine, no.62, January 2021

This was part of an exciting collaborative project, devised and completed by film maker, Ian Cottage, that also involved three other Bloodaxe poets: Miriam Gamble, Philip Gross and Helen Ivory. All the films are available on Ian’s website – grateful thanks to him and to Neil Astley.

Poetry & All That Jazz, South Downs Poetry Festival/Festival of Chichester, 2020

Poetry & All That Jazz, South Downs Poetry Festival/Festival of Chichester, 2019

Poetry & All That Jazz, South Downs Poetry Festival/Festival of Chichester, 2018

Words for the Wild, ed. Amanda Oosthuizen and Louise Taylor, 2018

The Forward Book of Poetry, 1997 (published as Marion Lomax)